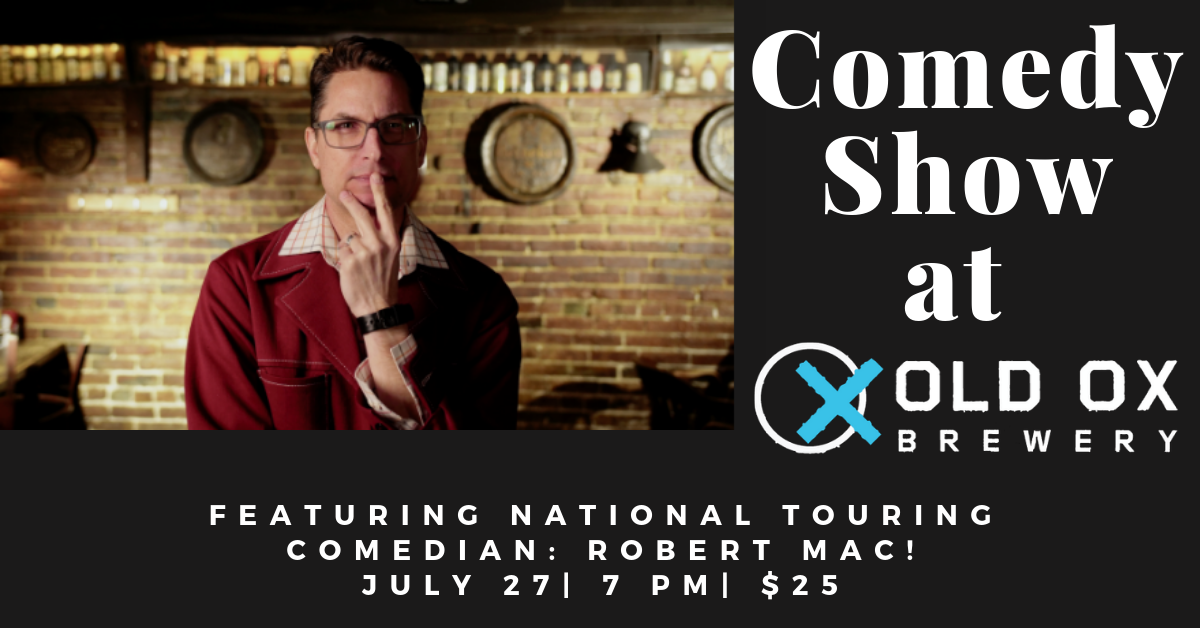 Join us July 27 at 7:00 p.m. when Robert Mac takes the stage at Old Ox Brewery. Lucas Bohn will be the emcee for a night full of lagers and laughs. Doors open at 6:15 and seating is first come, first served. Get here early to grab a seat, food from Killer Tomato and a beer!

Summer Special! Tickets are only $20. Get them before we sell out! Get your tickets here: https://bit.ly/320q0kd.

Robert Mac is a celebrity comedian based out of Washington, DC. He is best known as the Grand Prize Winner of Comedy Central’s national “Laugh Riots” competition and for his appearances on Comedy Central’s “Premium Blend” and NBC’s “Last Comic Standing”. He has shared the stage with Robin Williams, Adam Sandler, Larry the Cable Guy, Margaret Cho, Patton Oswalt, and Victoria Jackson.

Mac has also been seen on the stages of the inaugural Great American Comedy Festival, the Boston Comedy Festival, Montreal’s Just for Laughs Festival, and other highly acclaimed events throughout the country. A few years ago, Entertainment Business Journal ranked Mac in the top 100 stand-up comedians in the U.S. His signature “intelligently designed comedy” has audiences laughing and clapping for more.

Lucas Bohn is energetic with an edge. The perfect blend of schoolboy charm and bad-boy charisma, his comedy is both smart and audacious. Known as the little guy who generates big laughs, Lucas has shared the stage with Dave Chappelle, Jimmy Fallon, and Kevin Hart. Lucas’ high-energy shows and hilarious impersonations make him an instant hit with audiences of all ages.
In 2013 Lucas was nominated “Comedian of the Year” by Campus Activities Magazine.